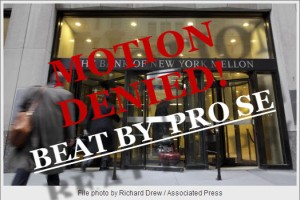 Judge Seabright, a former prosecutor, determined in his Order of April 3,2013 that a letter provided as supporting evidence by BONY asserting that “[y]our loan was sold to a public security managed by The Bank of New York and may include a number of investors. As the servicer of your 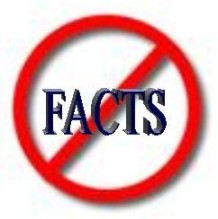 loan, Chase is authorized to handle any related concerns on their behalf” did “not establish that Plaintiffs’ mortgage loan was sold into a public security, much less a public security managed by BONY and for which U.S. Bank is the trustee. Nor does the PSA establish that it governs Plaintiffs’ mortgage loans. As a result, Defendants have failed to carry their initial burden on summary judgment of showing that there is no genuine issue of material fact that Defendants may foreclose on the subject property.” See [PDF Order], pages 8-9.

Plaintiffs Amina succinctly made points in their claims for Quiet Title:

Plaintiffs seek a quieting of title against the parties which, upon information and belief, are not Owner and holder of any Note encumbering the Homestead. At all times relevant to this Complaint, MERS’ permission to do business in Hawaii is “suspended.” WMC has not filed an Annual Report in Hawaii since 1997 and has not been in good standing in Hawaii since 1998. WMC is no longer in business and there has been no assignment in the county property record, thus the principal is unknown or nonexistent. CHASE HOME FINANCE LLC which not registered to do business in Hawaii, has served an “Acceleration Warning (Notice of Intent to Foreclose). It is unknown how Chase came on the scene. There was an exorbitant payoff penalty of 6 months of payments. The servicer (CHASE HOME FINANCE LLC / CHASE HOME FINANCE. INC.) has refused loan modification.  See Complaint, page 2.

Of course, BONY responded with a Motion for Summary Judgment and Plaintiff Amina responded with a well written and detailed Opposition to Defendants’ Summary Judgment. It even included an excellent “gotcha” on the Defendant BONY’s attorney, Jeffrey H.K. Sia, that appears to “out” ol’ Jeffrey for a slick legal trick. Way to go Pro Se…just another reason to file “Verified” Complaints:

“The Declaration of Jeffrey H. K. Sia states that the declarant has “personal knowledge of the information and matters set forth within this Declaration” but fails to state how that personal knowledge was obtained, thus fails to “show” personal knowledge. The custodian of the records is never identified. There is no evidence of when or how the records were created. There is no evidence of regular business practices. The Exhibits are not attached to the Declaration but instead are attached to the [68] Defs SCSF (according to the Sia Declaration paragraphs 3 through 15), thus the perjury clause can have no effect since, if any statement about the Exhibits turns out to be false, the declarant can merely say that he was referring to some other document and exhibits, not the one that got filed. In fact it is not even clear that the Exhibits were attached to Defs’ SCSF, as they all have separate docket numbers [68-2] through [68-14]. Mr. Sia’s swom statements about the Exhibits thus have the status of argument, not the status of admissible evidence. “Statements of counsel in their briefs or argument while enlightening to the Court are not sufficient for purposes of granting a motion to dismiss or summary judgment.” (Trinsey v. Pagliaro, D.C.Pa. 1964,229 F.Supp. 647).” See Plaintiffs’ Opposition, pages 3-4.

As you read the Opposition you begin to realize the tricks and hazards opposing counsels will throw in the path of Pro Ses. They do this to attorneys too – and some are just not bright enough to catch the fast balls. Even when you realize you have to read and respond to every little twist you can still be out maneuvered.

This was a real victory for Pro Se and mandatory reading for each and every homeowner facing foreclosure and especially for those thinking about going in Pro Se.

It has to be said that having an intelligent, ethical and astute judge is essential. Judge Seabright is the pillar of our entire Hawaii federal court justice system.

He is especially knowledgeable about this area of the law as his prosecutorial skills allow him to hone in on the corruption as well as the truths, he is willing to undertake in-depth legal research, and is able to write decisions that are clear and cogent. …And this is what it takes in these fraudclosure cases.

Honorable Judge J. Michael Seabright – Thank you. Mahalo!
This is why he gets the “Gets It” award:

The U.S. Senate voted 98-0 yesterday to confirm J. Michael Seabright as a U.S. district judge for the District of Hawaii. ”I’m very honored to have received that vote,” said Seabright, 46, an assistant U.S. attorney since 1990 and head of the white-collar crime section since 2002.

See also The Securitization Curtain is Lifting in Hawaii!

Image of the Honorable John Michael Seabright from http://www.grainnet.com/articles/usda_cited_by_federal_judge_for_permitting_violations_in_hawaii-36404.html