The recent lawsuits filed in the SUPREME COURT OF THE STATE OF NEW YORK,  COUNTY OF NEW YORK are the beginning of a long process unraveling the frauds created by a generation of “Younger Boomers” and “Now Generation” Wall Street bankster executives that expected immediate gratification.

These smart-asses didn’t take the time to ensure all the pieces to the puzzle fit before they began their filthy rich land grab operation, causing a lot of damage and red ink to America and the rest of the world. Their failures are your insurance to defeat foreclosure once you understand what is missing.

As noted by Ron Zemke in his book, Generations at Work, significant events of the Boomer generation included the civil rights movement, the Vietnam War, the women’s

liberation movement, the Cold War, and political assassinations. Boomers reflect that era in many ways: they tend to want immediate gratification and think they can change the world (or at least their slice of it) and they want to fulfill their own individual goals and potential, whether or not they break the rules. They come to the workplace and expect to be rewarded for their efforts and prefer to ask for forgiveness rather than permission. Boomers love the old ad slogan: Be all that you can be! (with other people’s money). It’s their motto. Sound like Wall Street? How about your political representatives?

At the core of the Wall Street financial debacle hidden under miles of politically incestuous relationships is the “Mind Trap” idea of Mortgage Electronic Registration Systems, Inc. It was developed much like a casino board game. In fact one of

As these “lack of assignments” / “empty trusts” lawsuits move forward Wall Street will need to re-group and devise a new propaganda machine to overcome the wave of deception about to devastate the fraudulent tax shelter scheme they deployed.

The REMICs Have Failed! Gone are the pension funds! Yes, your Honor – yours has disappeared too.

Now, who was supposed to assign those mortgage loans to the trusts? If you say the trust 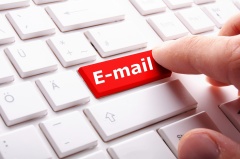 Duffin writes Horstkamp for an explanation of the recordation purpose of Mortgage Electronic Registrations Systems, Inc. as “nominee for the actual lender” asking such questions as”

…”will they be required to register in each state under the various fiduciary or trust laws for us to insure the mortgage lien priority. Or rather, can there be a question of the validity of the mortgage on a state by state basis relating to the authority of Mers or Mers involvement in the transaction since they will not be involved in the funding?

…Another article indicates that Mers has filed foreclosures in various states. If someone files a defense related to the validity to the lien of the mortgage based upon Mers “involvement” or lack thereof (consideration), I would think it very difficult to deny coverage since we are aware of the various issues surrounding the transaction when we insure…

Duffin then adds a little tongue in cheek: “On the other hand, maybe Mers is a methodology whereby no title insurance will be necessary.”

To which apparently an unidentified 3rd party replies: “Bite your Tongue!” And continues with what appears to be and explanation from the MERS company: “The idea is to eliminate the need for mortgage assignees to record notices of assignment to protect their interests–and to facilitate purchase and sale of mortgages in the secondary market.”

[Black’s Law definition of “Facilitate” is certainly appropriate:  “facilitate,vb. Criminal law. To make the commission of a crime easier. • Property (such as a vehicle or home) that facilitates the commission of certain offenses may be forfeited.”]

The email is then forwarded on to Ms. Horstkamp for answers.

Boy! don’t you wonder if they had any idea of the fraud that they were about to encounter?

Now, if you have been wondering why the MERS Blur Gang hasn’t been indicted by the US Attorney General’s Office for the fabricated assignments of the mortgage loans that are apparently missing from the REMIC trusts that were bought with hard earned pension funds by investors… the next paragraph kinda spells it out:

“Extensive legal research by the law firm of Covington & Burling (DC) was part of the process of Fannie Mae and Freddie Mac’s approval of MOM. The research concluded that a court would not hold that a loan is unsecured or that the validity of a mortgage is subject to challenge with MERS as original mortgagee as nominee. There is no requirement under the UCC that the secured party identified in the security instrument be a principal rather than an agent,” states Horstkamp.

From 2001 until he became Attorney General, Eric Holder worked as an attorney at Covington & Burling in Washington, D.C. Ahhhh – the ties that bind. 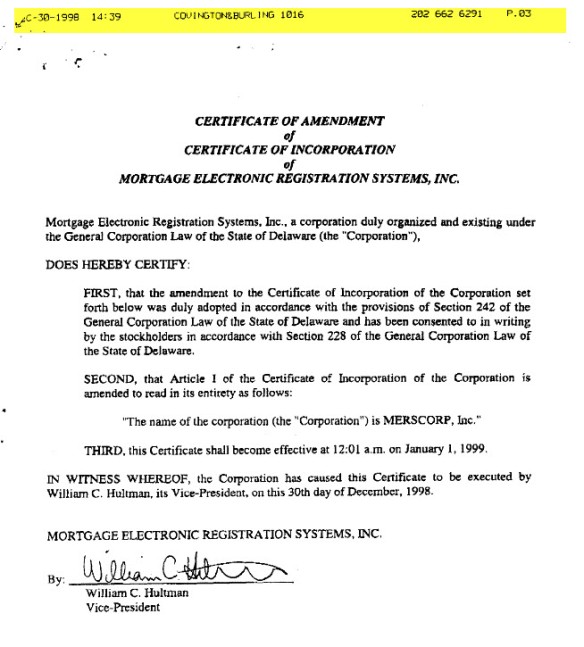 Why is this so important to know? Not necessarily because Covington & Burling faxed the Certificate of Amendment of the Certificate of Incorporation, but because the name change and timing will be an essential defense when the banksters’ new propaganda defense begins to surge.

To overcome PHOENIX the banks will claim “sophisticated investors” and likely use the UCC Article 9 argument that assignments did not need to be made.  That might have some wisdom, except for the fact that with this name change to MERSCORP, Inc. on January 1, 1999, the registry system, the membership, the employees, the trademark, and the assets that were once Mortgage Electronic Registration Systems, Inc. became the property owned and controlled by MERSCORP, Inc., a separate and distinct company from the 2 earlier predecessors, both of which were named Mortgage Electronic Registration Systems, Inc. and now were eliminated. The majority of the mortgage loans fictitiously pledged to the trusts happened between 2003-2008.

Whether it was part of the plan to continue the confusion or the error of some corporate idiot who decided to change the corporation’s name is not clear, however – a 3rd Mortgage Electronic Registration Systems, Inc.(corporation) was created per the MERSCORP, Inc. VP, William Hultman deposition. Take the time to read and dissect pages 41-48. [PDF HERE] 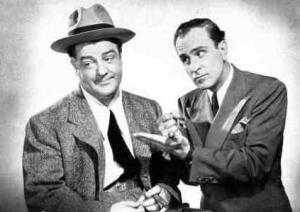 The deposition reads like an Abbott & Costello radio routine. What it boils down to is that there were three (3) Mortgage Electronic Registration Systems, Inc(s).

Hultman A. When Merscorp, Inc. started on June 30,1998, it succeeded and assumed all of the duties and responsibilities of powers of the original MERS Corporation, Inc. in 1995. As of January 1st, 1999, the functionalities of the original companies were bifurcated into two parts. The subsidiary held was given the responsibility to hold title to the mortgage lien or become the beneficiary of a deed of trust and all the responsibilities related to that. The parent company, and the parent company obviously was the sole shareholder of the subsidiary, the parent company is the operating company which all — everybody’s employed by the operating company. It’s the company that owns the registries, owns all of the intellectual property. It’s the one that does all of the operations. So in essence, everything that the old companies did except for the title holding function.

Q. And as for the title holding function, that now resides with the third iteration of Mortgage Electronic Registration Systems, Inc. as of January 1, 1999, is that correct?

Why is this important and why should every judge and foreclosure defense attorney take special notice? MERSCORP, Inc. is not in the mortgages. Stop being lazy and using the “MERS” acronyms that continue to blur the identities of separate and distinct corporations.

It is MERSCORP, Inc. that owns, controls and operates the electronic transfer-ability of the registry system needed to get from the UCC Article 3 negotiable note that the homeowner signed to an Article 9 securities instrument. Remember the line above in the Duffin – Horstkamp email…”and to facilitate purchase and sale of mortgages in the secondary market”?

The loans needed to be electronically transferable in the secondary market securities scheme. The banks thought they’d be able to slide the homeowners’ “explicit agreement” per the UETA Sec. 16 right by everybody – just like the “right to sell” clause – but it failed miserably. Another missing puzzle piece. There are no explicit agreements and Mortgage Electronic Registration Systems, Inc. in the mortgages is not the electronic registry system. If the scheme hadn’t been so blatantly deceptive from its inception, lenders would have insisted on a paragraph that specifically stated that the loans would be electronically transferable. 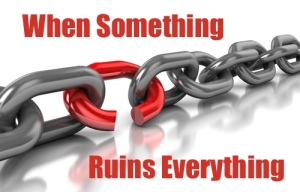 You know why they didn’t? Because traditional mortgages were meant to be returned and burned when they had been paid off… and these “new” defective loan products were not traditional mortgages. These were contracts without mutual understanding, based on deception (and yes, fraud) that were materially altered into securities without authorization. 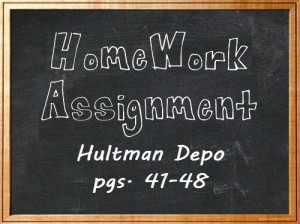 Okay – your assignment … read the entire Hultman deposition; stop using the MERS acronym and start explaining the the separate and distinct differences between Mortgage Electronic Registration Systems, Inc. and MERSCORP, Inc. to the judges (quit thinking all judges are idiots or only protecting their retirement portfolios).

It’s time to realize there are no explicit agreements to electronically transfer mortgage loan documents (per UETA Sec. 16) as needed in the UCC Article 9 argument because MERSCORP, Inc. is not in the mortgage documents. And for goodness sake – don’t bring up piercing the corporate veil. They do us more good being separate and distinct rather than one in the same. 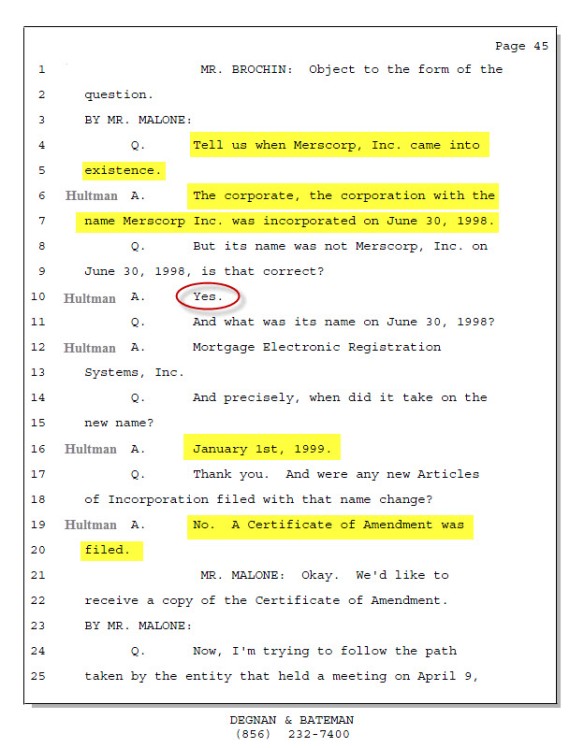 Yeah, we know how precious time is.

“MERS is not a “holder” under the plain language of the statute,” says the Supreme Court of the State of Washington

MERS – TOO MANY DEAD DUCKS

THE 3 STOOGES OF MERS – DISORDER IN THE COURT

9 thoughts on “TBTF HAS MET ITS WATERLOO”